Another mishap occured today. I got a blank page when loading the blog in my browser. After some problem solving, I found that the newsfeed I added the other day caused the error. I replaced the newsfeed with some old Web 1.0 static links. Ironic, isn't it? The newsfeed being a Web 2.0 feature.

Finally I managed to get a Flickr account. It has taken me days! You are supposed to use your Yahoo account and, of course, I had forgotten mine. So, over to Yahoo to retrieve my username and password. Luckily I could retrieve my username, which was mailed to me, but for some obscure reason you have to go back to Yahoo and redo the whole procedure in order to get your password. I tried and I tried and I tried, but got error message upon error message upon error message. I gave up, almost. Exasperated, yet I continued as I'm on several mailing lists at YahooGroups. Since Yahoo started using RSS feeds for the mailing lists, I too switched to RSS feeds instead of having my inbox clogged. It's such a stress factor to see your unread e-mail as it nears 200, 300, 400, 500. It's less stressful with RSS feeds, at least in Safari. I can pretend they don't exist. But, obviously I haven't been at YahooGroups for very long. The log-in page did not recognize me and there is no way for me to post to the lists anymore, unless I sign up anew. The scary thing is that it must have been years since I posted to a list over there. I've completely forgotten my social networking manners! Too busy trying to catch up with Web 2.0. Makes you think, doesn't it? To make a long story short, I signed up for a new account. But by then I was too exhausted to check out the site, even less to network. 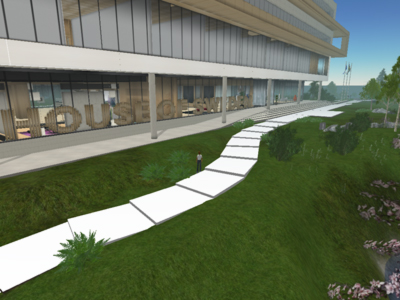 Although I've never really understood the need for a 3D space that stages the 1D world of Second Life, I took a tour to SL today. Created an avatar, downloaded the software and teleported myself to the House of Sweden - an afterthought: it might be a good idea to read up on Second Life in the Second Life Wiki before entering SL, or else you'll probably end up fiddling with all the menus and buttons, which I did. I met three avatars there to network with. They talked about what a boring place it was and how they were stuck in a place they couldn't get out of as teleporting inside SL didn't work on this very day. Couldn't join the conversation though, as I fumbled around among the menus. Clicked too much too fast and SL crashed. When I returned to the House of Sweden a little bit later, the place was empty, no not empty, desolate. See the snapshot of my avatar before House of Sweden.